May 5, 2014 | Comments Off on Symantec calls antivirus 'doomed' as security giants fight for survival 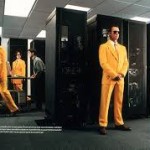 The End is Near For Paid Anti-Virus on PC's

What is happening to all the anti-virus providers for PC (and now Macs!)  They seem to be going into other businesses or out of business. Matthew Schwartz of Informationweek.com has some interesting insights into this alarming phenomenon.  Full Story. …