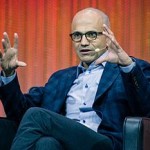 Microsoft CEO Satya Nadella on Thursday laid out plans to cut as many as 18,000 jobs in the next year.

The software titan had been widely expected to announce the cuts today, but the magnitude of the layoffs was surprisingly large. A vast majority of the cuts — 12,500 — will come from professional and factory positions from the recently acquired Nokia devices and services division.

Microsoft said the company is working on reducing the first 13,000 positions, and many of the employees will be notified in the next six months.

Microsoft exec Stephen Elop is making it abundantly clear: Microsoft has no intention of staying in the Android business.

In a memo emailed to employees on Thursday, Elop said Microsoft’s devices business will concentrate “on the areas where we can add the most value” and noted that Nokia X smartphones, which run on heavily modified versions of Android, will migrate to Windows Phone.

Nokia’s X line of devices was the company’s attempt to attract more budget-conscious customers to its platform. This was also a major story in the ongoing Microsoft-Nokia saga, since it ran on Android — Microsoft’s chief competitor in the mobile market. It was initially believed that Microsoft would stick with Android on Nokia X devices, but according to Elop, the cheaper end of the smartphone market is a key area of growth …

Nokia released its first ever tablet to the world on Thurs. Nov. 22 and the response has been generally favorable with respect to the excellent engineering and design.  It remains a mystery what Microsoft will do with this excellent tablet running Windows RT 8.1 when its purchase of Nokia’s devices division is complete in 2014.  The following review is by one of the leading Microsoft commentators Mary Jo Foley who has used the Microsoft Surface RT with great success since it original release.

The Nokia Lumia 2520: My week with the ‘other’ Windows ARM tablet

Thanks to blockbuster sales of the entry-level Lumia 520, Nokia recorded its best-ever quarter for Windows Phone sales, with 8.8 million units sold in the quarter ending September 30. The news comes as part of the firm’s interim report for Q3 2013, during which Microsoft announced its intention to purchase Nokia’s devices and services businesses.

“The third quarter was among the most transformative in our company’s history,” Nokia CFO and interim President Timo Ihamuotila said in a prepared statement. “We became the full owner of NSN [Nokia Solutions and Networks and HERE] and we agreed on the sale of our handset operations to Microsoft, transactions which we believe will radically reshape the future of Nokia for the better. Subject to the completion of the Microsoft transaction, Nokia will have a significantly improved earnings profile, a strong financial position, and a solid foundation from which to invest.” …

September 6, 2013 | Comments Off on Could Nokia Purchase Lead to Microsoft Breakup?

There is a sneaking suspicion that the recent purchase of Nokia smartphones by Microsoft may in fact lead to the breakup of the digital giant.  Steven Elop, CEO of Nokia, is an old Microsoftie coming back to lead the newly expanded Devices division and there are rumors that he might in fact be in line for the new CEO job.  But can the complex behemoth that is Microsoft be agile enough to survive in today’s tech atmosphere as a single unit or as a number of more agile units?  Stay tuned. …