Who Will Buy a Shiny New Apple…? 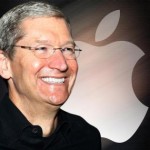 Is the “new iPad” just another expensive toy?  To many yes, but to nearly half the owners of present iPads, it’s a must have.

To put things in perspective, Tim Cook, the new CEO of the “post-Jobs” Apple, reported astounding sales figures of all Apple “devices” for 2011.

“Last year, Apple sold 172 million of what Cook calls “post-PC” devices, making up 76 percent of the company’s revenues. On a related note, he said Apple sold 62 million iOS devices in the last quarter and 315 million overall.”