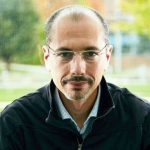 Giuseppe is the founder and CEO of Skypersonic LLC a US company focused on Autonomous Vehicles & UAV Systems manufacturer located in Detroit Metro, Michigan.

Giuseppe has been a professor of Attitude Orbital Guidance and Navigation Control at the International Master II level in Space Exploration and Development Systems at Polytechnic of Turin, Universität Bremen (Germany) and Grande Ecole Aérospatiale Supaero Toulouse (France).

He was responsible for the development of some projects on behalf of the European Space Agency and NASA at Thales Alenia Space.

He studied Astronautical Engineering at La Sapienza di Roma, Giuseppe participated to the engineering design and development of several equipment for the International Space Station with NASA.

He also established, in 2014, the Leonardo International Foundation to promote opportunities for Italian companies to incorporate in the U.S. He conceived the idea of assisting Italian SME in their US incorporation and operations. Presently he is the president of the Italian American Business Chamber in Michigan.