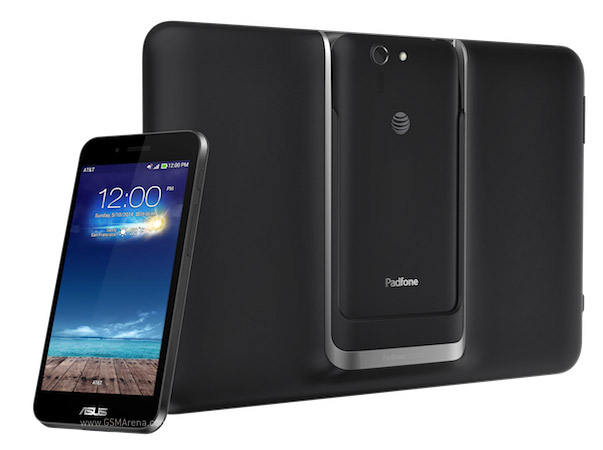 Possibly the Best Phone/Tablet Deal Yet

I have to admit that I was pretty pumped to receive the demo copy of the Asus PadFone X from AT&T (props to Teresa Mask!)  I was able to spend close to a month with it and came away with mixed feelings except for one very clear realization: For all its limitations, this device is a crazy good buy for just $199 under a two year contract with AT&T.

As will all my reviews, I have to disclaim that my observations are not meant to be an exhaustive investigation of the device.  There are wonderful sites like Engadget that do super breakdowns of every imaginable device including this one.  On the other hand I want to approach it more from our listeners’ point of view.  What are the pro’s and con’s of the device and would I use it on a regular basis given the opportunity?

Before phablets (e.g. Samsung Galaxy Note 3, LG G Pro 2,Nokia Lumia 1520) became hugely popular in Asia and then the US and Europe, the PadPhone proposed to be an excellent combination of phone and tablet.  Asus PadPhone X is the first of its kind to be sold in the US under a carrier (AT&T) but it is not the first of the line.  The concept launched in 2012  was to combine the power of a good smartphone with a tablet that would reflect the best of the phone in a bigger setting.

I loved the combination.  First of all the smartphone is an almost perfect 5” tall with a nice bright screen driven by a powerful SnapDragon 800 chip and 16GB of space running Google’s latest software Kit Kat.

The coolest part is that the phone neatly slips into a dock on the back of the tablet and voila, turns it into a 9 inch tablet.  My aching eyes rejoiced at once, although I was soon struck with how sluggish the tablet felt compared to the phone!  Nonetheless it was a delight to have a big pallet upon which to display webpages, emails and documents.

I think that you will value the PadPhone most if you see that it is not meant to replace but to enhance your digital experience.  It allowed me to carry around a great, basic smartphone with decent tech specs and a nice big 5 inch screen running the latest Android hardware.  It was a definite “two fer”: the convenience of a just right size smartphone in my pocket most of the day and then in the twinkling of an eye the advantages of the 9”screen size when I got home for watching video, Skyping, reading emails comfortably and composing short messages with the clever Swye keyboard.  Frankly I don’t care that it isn’t a big deal productivity tool. I have my laptop for that, thank  you.

I have to admit that the tablet function disappointed almost immediately because it was relatively heavy and offered no way of propping it up. In other words, I found that I did not want to use it as a Kindle reader or for viewing longer videos.

Despite the specs for the device, I was very disappointed in how slow the browser was on the tablet. In addition to that, however, there was the whole issue of dealing with the layers of proprietary Android applications on the PadPhone.  You literally had to swim through Google Apps, Asus Apps and AT&T apps to finally tweak the system to your pleasure.  That is why I shy away from Android devices in general: they require hours of tweaking the interface to arrive at a functional  set of screen pages.  So if you are an Android lover I just spoke blasphemy but if you like the mostly pre-set screens of Windows Phones and Apple devices it’s a pain in the pants

All of the above said, you have to stand back and look at the bottom line.  For an amazing $200 ( with 2 year contract) from AT&T you get a very nice full size smartphone and a brilliant 9 inch tablet.  That is a combination that you have to look long and hard for anywhere else.  This is just right for the casual user who wants to read a book, watch a video or write a short email.