Nokia 635: The Doorway to the Smartphone World 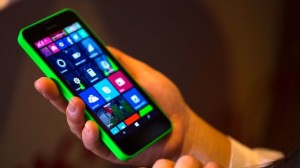 Most of us Americans are so used to the array of smartphones with all the bells and whistles in every 7 Eleven, Best Buy or AT&T store that it’s hard to imagine a world without them. We ho-hum the latest version of the Yazoo phone because it only has 16 GB of internal storage, quad-core processor etc. Unfortunately for manufacturers that razzle dazzle end of the smartphone market is slowing down because in our country and most of the “First World, markets are saturated. However, there are literally billions of users around the world just waiting for the right device to move up from their feature phones. Enter the Lumia 635 offered in the US on AT&T.

This creates a strange dilemma for this reviewer. To wit: Do I compare apples to apples or mix up my fruit selection? On the face of it, for the majority of US smartphone users, this device would be a step down. It sports a mere 8 GB of internal storage (up to 128 GB more on a micro SD card), just 512 MB (that’s right campers MB) of RAM and no rear facing camera! What?! No selfies?! BUT for folks who have only been able to afford feature phones this is a massive step up with a 4.5” LCD Touch screen made of Gorilla Glass premiering the new and improved Windows Phone 8.1 with Nokia Cyan Mod.

As in past reviews, I will leave the technical review to the experts and one of the most thorough ones I have ever found is at GSM Arena. My focus is on the personal experience with the Nokia 635 on AT&T (who kindly provided the device for testing.) Now with full disclosure made, let’s get to the point.

Getting Down to Details

You need to understand that at the time I was using the 635 I was also using an iPhone 5. They are identical in size and outward appearance; so the “hands on feel” i.e. tactile experience is pretty much identical. What was a bit disorienting was Nokia’s decision to move all the buttons to the right hand side. On previous Nokia devices and the iPhone, the rocker buttons for the volume are on the left and the power button is on the right, which is very handy for a righty like me. On the other hand, the rubberized texture of the 635 was much more comfortable in the hand than the iPhone 5.

Buttons on the 635 are all on the screen and have the unique Windows 8.1 functions attached, e.g. holding down the left button for a second brings up a screen with all the active windows allowing you to scroll to the one you want to use or to simply “X” out of the single windows one by one. As with most smartphones, holding down the center button brings you back to the home screen with the unique Windows live tiles that are being imitated with varying degrees of success by Android and Apple.

A quick word here about smartphone operating systems. Increasingly phone OS are becoming the determining factor in device selection. Every one of the big players: Android, Apple and Microsoft are shooting for hooking you on their system. I won’t go into a long dissertation about the respective merits of the individual systems except to say that I believe that Windows 8.1 with rare exception can run with the best of the OS’s, particularly following the recent Windows Phone 8.1 upgrade. For instance Microsoft recently introduced Word Flow keyboards to Windows Phones that will work just like the immensely popular Swift Key on Android (also soon to be imitated in Apple’s iOS 8). The bottom line is that if you enjoy the Windows Phone 8.1 OS then you will love this phone. It is worth noting that the Nokia 635 (along with two other devices) are the only Windows Phones to come with the most recent version of Windows Phone 8.1 installed out of the box.

One outstanding problem, however, are the applications which are carbon copies of main Android and iOS programs…without the polish in many cases. The most glaring example for me is the horrible version of my favorite note taking app, Evernote, which is just plain buggy, slow and clumsy. However, it is hard to blame the current leaders at Microsoft for this since the problem is twofold: 1. the competition was way out front in the development of money making apps and 2, the original Windows Phone 8 team deliberately kept developers from seeing the OS until it was launched for “fear” of someone stealing their “secret sauce”. This handicapped the Windows Phone developers and was hardly enticing to them since they could already make a ton of money on Android and iOS. Why develop anything for Windows? The result has been a lot of low grade knock offs of existing software (e.g. Evernote) or pure misleading apps and scams. Microsoft is finally flushing out the garbage, but it’s too little, too late for many.

There is a redeeming factor in the Nokia 635 and that is the excellent Nokia software on board:

“Windows Phone 8.1 brings a plethora of new features and UI improvements, while Lumia Cyan build on that and delivers Nokia’s exclusive apps such as the Nokia Camera, Creative Studio, Storyteller, plus it adds some additional options on selected Lumia smartphones, such as Miracast Wireless Display support and Dolby Surround Sound capturing.” (GSM Arena).

This is not the typical junk that Samsung and/or the carriers slathers on user interfaces, but really helpful, well done programs (like the Here mapping programs and Drive+) you find native to this and pretty much all Nokia devices.

Finally let us not forget Cortana, the new vocal assistant which is mounting a serious challenge to both Apple’s Siri and Google Now. I won’t go into detail but I will say that I found this to work much more smoothly on the 635 than Siri does on my iPhone 5. Personal taste perhaps but you should keep this in mind as an increasingly important component to any phone device.

Before I wrap this up, I do need to admit that there are some hardware limitations to the Nokia 635. The processor runs on just 512 MB of RAM but is not noticeably sluggish. There is only one camera and it is just 5 MP but with the excellent Nokia Camera software it was more than a match for the iPhone 5 I use on a regular basis and has been horribly disappointing. Obviously if you are a photog, this little phone won’t fit your bill, but then neither would a little Kodak Brownie! Remember, this is an entry level device in the smartphone category.

I think the decision to buy a Nokia 635 boils down to two things:

The Nokia 635 is a sound piece of hardware from the leading smartphone device maker in the world. It is an entry level device without a lot of restrictions for someone who is just getting into smartphones, seniors on a fixed income, college students with financial restraints and kids just breaking out of the feature phones and into the “big leagues”. At the prices AT&T, one of the biggest cell providers in the country, is offering, this is a virtual no brainer unless you “owe your soul to the company store”, i.e. Android or Apple.