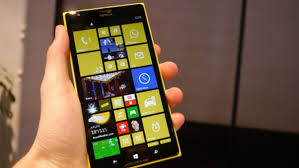 Is bigger always better?  As the bard of Avon might have said, “Aye there’s the rub!” The fact of the matter is that it is hard to evaluate what may be one of the best Windows 8 Phones in the Microsoft lineup with out answering the perennial size question.  So, without pretending to be all “high-geek” in my analysis, here are my impressions of the impressive Lumia 1520.

Just in terms of its hardware, the Lumia 1520 (Sold by AT&T in the US for $199) is the first Windows 8.1 Phone with a quad-core chipset (a 2.2GHZ Qualcomm Snapdragon 800 to be exact) The Nokia Lumia 1520 also has the distinction of being one of the company’s first two supersize phones. This premium handset also features: a 6-inch 1080p HD display and a 2-megapixel front camera, 20 MP Pure View rear camera to name just a few outstanding specs. (Full Specs)  The device comes in 16 and 32 GB sizes but you should note that it has a Micro SD slot for expansion up to 32 GB.  (But who is counting with all the free cloud space being offered by various sites? All this is done with the signature Nokia fit and finish that shouts quality build throughout.  Add to that the excellent native Nokia apps like mapping, navigation, music and camera software (actually pretty overwhelming for the average point and shoot whimp like me) and even the issue of some lame versions of Win 8,1 apps fades into the background.

What immediately struck me was: A) How in the world will I carry this around? and B) Where does it fit into the panorama of devices that I have at hand?” Some statistics seem to show that the tablet segment is cooling down and the 1520 actually creeps into that segment (in Spanish we call them “tablefonos” or tablet-phones”).  So where does that leave this device standing?

Even with my big paws, I needed a two-hand grip for efficiency and the slick polycarbonate Nokia finish provided frequent “gravity events.” The only sure place I could comfortably carry the device was in my shirt pocket (a non-starter for most women) and even then I was constantly clutching at my shirt when I bent over … anything.

Perhaps the more important question about the 1520, however, is not whether it is a remarkably effective PDA/communication device but just where it fits in the panorama of other devices out there.  My iPhone 5 is woefully inadequate in terms of readability with its tiny screen but it is highly portable.  On the other hand I also have an iPad to consume media much more comfortably and use a Surface 2 (RT) for even more effective applications on top of excellent media experiences (i.e. videos and multiple screens).  So where does the 1520 fit?  Frankly because of some remarkable price points on AT&T, Amazon and eBay, the 1520 has become a very attractive competitor in the small tablet segment, particularly if you are already working in a Microsoft environment at work.  Some extensive head to head reviews have even compared the Lumia 1520 very favorably against the segment leader, Samsung One Note.

What tips the scales for me are some of the new features arriving with Win Phone 8.1 update due out in June 2014 but available to all immediately as a Developer download.  I did an extended interview with Greg Sullivan, chief PR agent for Windows Phone, about the full range of remarkable improvements coming in Win Phone 8.1. According to Sullivan, the update will be coming with all the new Win Phone 8.1 devices available through AT&T as of June 2014 and through carrier and Microsoft update following that.

Here is a link to some of those great new features coming in Win Phone 8.1 Update, including Flow Writing (Window’s excellent answer to Swipe on Android) and many more great new touches.  As a matter of fact I think that I see the first glimmers of a common OS between Windows Phone 8.1 and some form of Surface because all of those features would work really well on a small device like the Surface 2 that I am using to write this review.

The Eyes Have It

I am not much of a photographer but love good photos.  During the time I was testing the 1520, I also was carrying around my iPhone 5.  Simply put, there was no comparison between the quality of the two phone cameras: the Lumia 1520 crushed the quality of the images that I was able to take on the iPhone 5.  All this was done, by the way, without using a lot of fancy Nokia photo applications, which are available on the Luimia 1520 because I am just too confused by all the options!

The Final Verdict Is Yours

The Lumia 1520 is an excellent piece of technology, well designed and crafted with an amazingly useful OS in the coming Windows Phone 8.1 Update. If you are currently on a Windows Phone and are looking for a bigger screen that will making reading, working in some light office applications and consuming media with gusto, this is an easy move.  There are even websites that will help you to download the developer’s preview version of Win Phone 8,1 Update but I suggest that you wait just a little bit for the official launch in June and risk any warranty issues.

AT&T is living up to its end of the bargain by making the entry level prices on this beauty extremely accessible.  For the business traveler this might be a just the replacement for a couple of devices (phone and tablet?) while freeing up room and dollars for an accompanying ultra-light laptop for work….  Say, a Surface Pro 3?! ;-))

Disclosure: The review unit was provided by AT&T