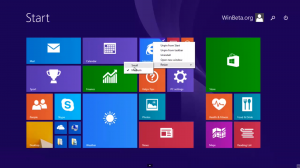 Warning: The following review of the changes in Windows 8.1 is accurate but delivered in a cynical and tired manner that is disappointing from a seasoned Windows watcher.  Take the information but leave the attitude.

The Internet Advisors
By Woody Leonhard on April 2, 2014 in Top Story

The soon-to-be-released Windows 8.1 Update brings minor improvements that favor those using a mouse — in other words, most Win8 users.

Anyone currently on Windows 8.1 will want the update; those who still haven’t made the Modern plunge won’t be impressed.

I know it’s hard to believe, but Microsoft released Windows 8.1 just this past October. At the time, that version seemed like a desperate attempt to placate traditional mouse users — essentially every Windows user without a touch screen — who balked at the full-screen–centric, tile-based, “Modern” UI. (For more on Win8.1′s key features, see the Sept. 19, 2013, Top Story, “Touring through the final Windows 8.1.”)

Some of the folks in Redmond genuinely felt that Version 8.1 would compel the hordes of recalcitrant Windows 7 users to download the new OS — and live happily ever after in the new Windows paradigm. That mass migration to Windows 8 never happened; customers had something to say about the update — and, for the most part, the words weren’t kind.

How, you might ask, could Microsoft expect to pull the flaming Windows 8 experience out of the fire just five months after releasing its best attempt at mouse mollification? The answer’s quite simple: it doesn’t. I think Windows 8.1 Update is a stopgap measure designed to help slow the unprecedented decline in PC sales. While the ‘Softies might be hopeful, they aren’t naive. They’re banking on something better in Windows 9 — and so should we.