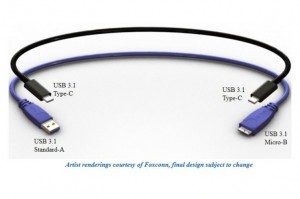 Before Apple’s Lightning cable, I never even dreamed of a life where input/output cables could be reversible. Now, however, it’s hard to go back to standard and micro USB, because I got so lazy. Soon enough, however, USB is getting a new reversible standard called “Type-C” which is around the size of microUSB, and which replaces USB 3 cables entirely, on both sides.

We now have our first look at this tech, from Foxconn via some pre-production artist renderings (courtesy of The Verge). Don’t be surprised to see something that looks a lot like Lightning – if you’re building a reversible I/O standard, it’s going to look pretty much like the most efficient design to come before, which is Apple’s. It looks like the main connects might be inside the cable end, however, instead of on the outside, as they are with Lightning.