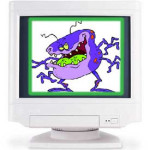 According to some news sources, Anonymous hackers may have had more to worry about than one of their own becoming an informant for the FBI.  Apparently someone slipped the hacker collective a nasty little trojan of their own that infected members’ machines.  Wonder if their anti-spyware caught it!  Earlier in the week it was reported that 25 members of the Anonymous had been rounded up in Latin America and it was revealed that a former member had turned FBI informant when he got caught out in the open.